Here is the link to all of the Powerchord radio podcasts. If you want to know what bands we are spinning or find out about awesome contests and request songs, like us on Powerchord radio on Facebook.

Some of my favourite shows so far:

An all DOOM/SLUDGE SPECIAL in anticipation for Sleep (I spin the whole Dopesmoker album) playing Vancouver:

I am joined by Cam Pipes from 3 Inches of Blood for a special 2 hour takeover:

Silliness ensues: I am joined by Erik, Coleman and Steve and we get drunk and sing along to random 90’s songs all while playing crushing metal:

I am joined by Chris, my partner in crime, as he spins some of his favourite new bands:

Fam-Jam special: I am joined by my mom, Debbie, and my sister, Katie and we play some of their favourite traditional blues/rock and roll as a family tribute to the roots of heavy metal:

Thanks for listening in and if you ever want to request songs, please do! We are always live on Saturdays from 1pm to 3pm on CITR or 101.9FM in Vancouver, British Columbia, Canada! 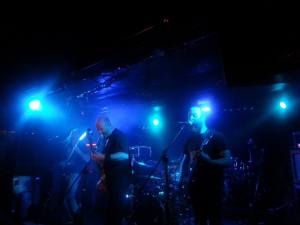 I walked into the Biltmore Cabaret for the first time to find a red, deep glow about the venue. I have only really known small venues in Calgary and it was a comforting and hazy place to host Anciients’ kick off Canadian tour.

Destroy All were the first band up and started on time. This 4-piece was not any ordinary metal band, showcasing 3 different vocalists all with their own unique sound. The main vocalist/bassist, Aron, was seemingly a fan of Venom as he was screeching out some killer vocals with their first song Leviathan Rise. Deep and high vocals from the other two guitarists fit well with this all-encompassing range of metal styles. Emerge Now From the Ashes was their second song and was laid down with some progressive drum beats. The end of the set was a crushing song named Long Live the New Flesh and was fun to thrash out to. Destroy All played a short but sweet 25 minute set. 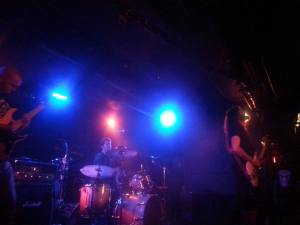 Skull Vultures were second on stage and were hard hitting and beautifully constructed. With sounds that emanated Neurosis and Gorguts, Skull Vultures are an up-and-coming band. Eli’s guitar wailing rang out clear with the first song,Reclaim. The drummer was a fill-in for the show, but proved he was worthy of being there by playing a drum solo for about a minute and a half which ended with the crowd cheering. Only Darkness started with a slow bass line of doom proportions and proceeds into Jason’s guttural war cry and speed which were a welcoming sound amongst the progressive drum beats and the beautifully high-pitched ringing of the guitar. Skull Vultures finished off their set with a song titled No Reason and it was over too quickly, in my opinion. They only played around 25 minutes, but I wish it was longer.

Black Wizard came up on stage and all the hair came too. You could tell it was going to be a stoner-iffic time. This band was LOUD, and I mean feedback loud. I had to leave the pit because, even with my earplugs, my ears were getting fucked by this Clutch-inspired dual-guitar 70’s band. Hair was swinging everywhere! The drummer, Eugene, was exciting to watch, with his ever moving body and head banging. The crowd really got going when Eliminator was played: their only song on their Bandcamp website. Vocalist Adam gave some crushing growls amongst his pure clean vocals and it worked quite well. About 3 songs into the set, Adam had some troubles with his guitar but the band kept playing until he fixed it. The following song began with a dual guitar riff of epic proportions and proceeded into a lovely slow and sludge orientated song. Black Wizard was overall a really good band, but the sound/venue was not working in their favour. 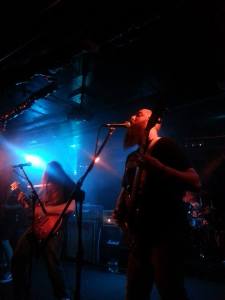 Black curtains were draped around the front of the stage in anticipation of Anciients playing. An ambient sound started coming from the monitors and around 120 people began making their way to the front of the venue. The curtains were drawn back and southern metal riffs rang out with their first song, Raise the Sun. The second song, Overthrone, started fast, but ended slow and people were starting to groove. After the second song it seemed the crowd was in a weed coma as Kenny, the lead guitarist and vocalist, had to spur the crowd asking “How you guys doing?” with the crowd cheering again. The intro to the next song, Faith and Oath, picked up speed and the crowd followed by head banging. The Longest River took us on a 9 minute progressive, stoner-metal journey and no one in the crowd was complaining as bodies were swaying. Anciients ended the show with a new song that began harder and faster than the previous ones, but progressed into a beautiful slow head drooping sludge that covered the crowd. Anciients played just shy of an hour and the band was really thankful everyone came out and supported them on a Tuesday night. Anciients, Black Cobra and Black Wizard are touring Canada right now. Check out Anciients.ca to find out when they will be in your city!

Words and photography by: Serena Navarro

VANCOUVER — Cannibal Corpse performed on a Wednesday night at the Commodore Ballroom and brought Behemoth as their co-headliner.

But first, Sweden’s Tribulation started the night off right with a mixture of old and new metal. It was kind of like a rock and roll/death metal/progressive mix and I dug it. The band played songs from their most recent album, The Formulas of Death.

Aeon, also from Sweden, was the second band up onstage, and they gave their dose of death metal to the crowd but not before a lengthy sound check. Aeon’s vocalist, Tommy Dahlstrom, jerked his mic off throughout the set between his depthless growls.

There are many bands that one wants to see throughout their lifetime and for me, Behemoth was one of them. Excitement grew within the crowd as the stage was outfitted with occult stage props. Vocalist Adam “Nergal” Darski graced the stage with two torches on fire and the band performed “Blow Your Trumpets Gabriel”. Halfway through Behemoth’s set a surprise guest helped Zbigniew “Inferno” Prominski on the drums, and the two of them were getting their groove on. The Commodore Ballroom stunk of testosterone, body odour, weed and beer and then Behemoth played their popular “Ov Fire and Void” and the place went a little hazy. It was lovely.

Thanks to Beatroute for the opportunity to review this show.

From the Very Depths is the 14th album by legendary extreme metal progenitors Venom. Following in the vein of 2011’s Fallen Angels, Cronos’s bass is present but the guitars take over most of the record. From the Very Depths is riddled with power chords, making the teenage metal fan in us all swoon. Loud, heavy and fast is on the menu for most of the record with only a couple songs slowing down.

“Temptation” delivers the speed metal the band adopted in later years (post Abaddon and Mantas) and the chorus is so catchy you might find yourself dancing around the kitchen to it. “Long Haired Punks” features fist pumping, crowd chanting lyrics that’ll make their fans thrash around, arms raised to the sky. Moving on, “Evil Law” evokes the delivery of the infamous line “Evil, In League with Satan” from Venom’s second full-length, 1982’s Black Metal, as Cronos growls “Evil” with his characteristically snarky smirk and high pitched tone. All told,From the Very Depths delivers what one wants from Venom: it’s dirty, wild, and rude.

Listen to From the Very Depths on YouTube: Grinding Teeth

My favourite and slowest song on the album, Smoke

Thanks to Beatroute for providing the album to review.

Powerchord Radio has been on air for almost 30 years now! Thanks to Ron for keeping Heavy Metal alive on CITR.

Being a host at Powerchord Radio for almost a year now has been one of the most awesome experiences of my life. Not only do a listen to amazing heavy metal bands but I get to search out awesome bands from all over the world and more importantly, here in Canada! I love supporting the small local artists that do what they do because they love it.

I will be posting many Powerchord podcasts here at HEAVYMETALHELPS!

The Facebook link is where you can find all the updated information on Powerchord radio and all the bands we spin on air!